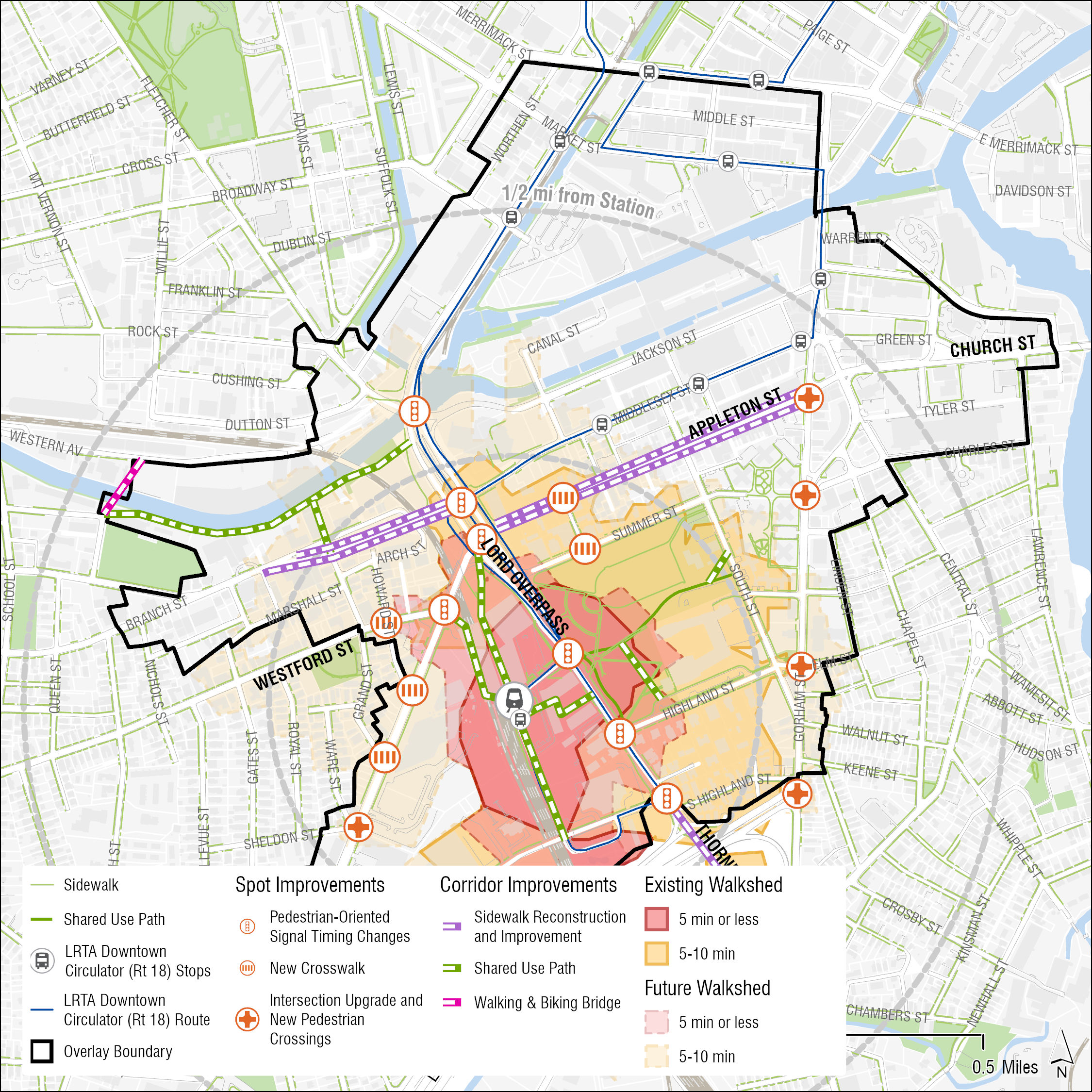 MBTA Communities (also known as Section 3A) is an exciting and bold program that affordable housing proponents and lawmakers from across the country are closely watching to see what kind of impact can be made in Massachusetts. With the release of the final DHCD Guidelines on August 9th, we can share our early experience drafting a compliant zoning overlay (see this City Council agenda, page 77 for the draft language) around Lowell’s commuter rail station. One caveat is that we’re still waiting for DHCD to release the Compliance Model in the Guidelines appendix which may contain further guidance. Here are some lessons learned from applying the legislation and guidelines.

1. The final Guidelines boil down the requirements

The headline requirements of Section 3A, the criteria for compliance as laid out in the statute, appears fairly straightforward: zone for a certain number of multi-family housing units by right, within a half-mile of an MBTA station, for a total zoned multi-family density of 15 units/acre. But knowing those criteria alone, municipalities, familiar with the realities of the location and context of their MBTA stations, might wonder if their community’s compliance is possible or worth it. What if preserved open space surrounds the station? What if the station is near the town boundary and only so much of that half-mile radius is theirs to zone?

The final Guidelines give community-by-community texture to the headline requirements and are clear about exceptions to each rule. For some of the headline requirements, it seems, exceptions are the rule: The Guidelines provide a database of, among other individual requirements, the minimum share of each community’s district to be located within a half-mile of an MBTA station; per the database, only 39 (of 175 total) implicated communities must locate a majority of their multi-family district within a half-mile of an MBTA station.

That said, DHCD is yet to publish one important part of the final Guidelines: Appendix 2, the communities’ means of calculating their zoned unit capacity and density. Appendix 2 may help answer a big question we had in Lowell: how are communities reasonably expected to consistently account for various dimensional and parking requirements, or define a threshold for excluding too-narrow or too-shallow or strangely shaped parcels when estimating the total capacity/density of potentially thousands of development sites? In the absence of the calculator, we landed on a ballpark estimate for capacity and density based on a combination of extrapolated test fits and GIS analysis. Our confidence in this approach is benefitted by the fact that the draft zoning far exceeds the required capacity, for reasons made clear in lesson #5 below.

2. There is a lot of flexibility in how the requirements can fit within a community

The degree of flexibility was an unexpected feature of the draft Guidelines, and the flexibility has only been expanded in the final Guidelines. While the minimum density and capacity thresholds are predetermined,  communities have multiple levers to pull and adjust to reach (or exceed) those thresholds.

This wide latitude of flexibility will certainly make communities think twice before defaulting to non-compliance, and it is clear that DHCD wants municipalities to have plentiful reasonable options for meeting the requirements. However, with all this flexibility in siting the zones, choosing between multiple scenarios could become contentious due to perceived economic benefits or negative externalities being distributed unequally.

3. You can get the job done with an overlay

The benefit of using an overlay is that it does not disturb the status quo while also delivering exactly what is required in Section 3A. The overlay we drafted in Lowell allows multifamily as of right in addition to allowing the underlying zones’ uses. To enable mixed-use development but avoid having the more permissive dimensional standards abused by primarily non-residential projects, we indicated that the overlay is only applicable for projects where a majority of the project’s square footage is dedicated to residential uses.

4. Together, Multiple character zones can meet the requirements

We decided to use three complementary overlay zones in Lowell that are each compatible with the MBTA Communities act and together meet (and exceed) the overall requirements. This approach is supported in the final Guidelines. The three zones intend to step down from high-density high-rise construction at the MBTA station to mid-rise on the primary corridors approaching the station, and finally to neighborhood infill around the station at historically-appropriate scale and density.

On top of the additional use standards (allowing multifamily, of course) and dimensional standards, we drafted variations of parking requirements and development standards that would apply to projects that seek to use one of the overlay districts.

5. Multifamily capacity does not always equate to redevelopment potential

Redevelopment at a minimum gross density of 15 units per acre can be as of right but unlikely to pencil out in already highly developed station areas, like existing even higher density multifamily and office parks. The final Guidelines choose to (probably smartly) avoid the issue of pre-existing private improvements when it comes to rezoning for multifamily (see section 5(c), bottom of page 9). But this does open the door to more decisions by the municipality in terms of opting to rezone for feasible redevelopment for housing production or simply having paper capacity that will be unlikely to be redeveloped in the next half-century. Either way, this potential de facto waiver does reward good behavior in terms of high-value investments around stations.

When drafting Lowell’s Section 3A zoning, we chose to only count parcels towards meeting the capacity goal if it seemed like there would be a reasonable chance of redevelopment in the short-term or met the other requirements for housing development (i.e. on publicly-owned land that can be redeveloped for housing). Viewed through this lens, properties with substantial pre-existing improved values were not counted towards achieving the target, and our resulting “total capacity” with those parcels included in the districts had a much higher result than strictly required by Section 3A.

This is an exciting time for action that meets housing goals and facilitates transit-oriented development. We are interested in how different jurisdictions approach compliance with these final Guidelines and hope that these lessons learned are useful. Feel free to reach out to the authors with follow-up questions or comments. We have a lot to learn together in this process!